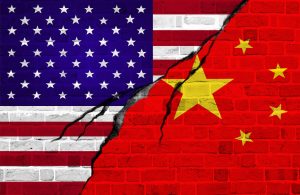 The U.S.-China bilateral relations is perhaps the most important political and economic issue international relations after the end of Cold War. At that time, China’s GDP was 1/75 the size of U.S. Thirty years later, the exponential growth of the Chinese economy means that China is the second biggest economy in terms of GDP after the U.S. and most economists are predicting that very soon China will surpass the US. During the same period Beijing got international ambitions and wants to play a leading role in international affairs. The combination of China’s economic growth and geopolitical rise led to the reorientation of the U.S. foreign policy.

The gradual rise of China and its trade and political implications

When Barack Obama took over the presidency in 2009, the wars in Afghanistan and Iraq appeared to be nearing their end. At the same time China overcame Germany and became the third largest economy in the world in terms of its GDP. This was a crucial factor for the relocation of U.S. interests to the Indo-Pacific region. In 2011, President Obama announced the rebalance plan towards the Indo-Pacific region, which did not include any military action but a multilateral cooperation plan in security matters, humanitarian assistance, disaster response, human rights, and freedom of navigation with the aim to limit China. Since then, the U.S. foreign policy is focusing more and more on this region and especially on China.

After Obama, Trump’s administration pursued a more confrontational policy towards China on almost every major issue in their bilateral relationship, especially regarding Taiwan, the South China Sea, and North Korea. Regarding trade policy, it organized increasingly around strategic competition with China, seeking to alter the terms of bilateral trade through unilateral means rather than through cooperation with like-minded members in the World Trade Organization (WTO). In 2019, the U.S. applied tariffs on 250 billion US$ of Chinese goods unless the two countries could reach a trade deal that addressed its grievances (such as tariffs, currency manipulation, intellectual property theft and forced transfer of technology).

During the previous four decades China’s foreign policy exhibited a low profile and mainly focused on regional matters. The turning point was the rise of Xi Jinping to the presidency of the country; such change became obvious in the 19th National Party Congress of the Communist Party of China (CPC) in October 2017, where President Xi Jinping presented China’s new leading international role, stating that “the Chinese nation … has stood up, grown rich, and become strong – and it now embraces the brilliant prospects of rejuvenation … It will be an era that sees China moving closer to the center stage and making greater contributions to mankind.”

China’s overseas engagement is based mainly on debt-trap diplomacy and the Belt Road Initiative (BRI). China’s debt-trap diplomacy deliberately seeks to entrap countries in a web of debt to secure some form of strategic advantage or asset. The BRI is a huge development project which is creating new economic and maritime corridors extending from Central Asia to Europe and the Indo-Pacific. BRI is not really about commerce but more about China’s political agenda. China wishes to use its commerce advantage for political leverage and to rebuild international trade rules for its own benefit. Besides BRI, China is financing and supporting several weak states around the world and through this is gaining political influence which redeems in international level. Its influence reaches the West, too. For example, Greece’s two biggest ports (Piraeus and Thessaloniki) are included in BRI while Chinese COSCO is the main shareholder (67 %) of the biggest Greek port of Piraeus. In 2017, Greece blocked an EU statement at the UN on China’s human rights violations. There are numerous similar cases in the international community during the past years.

China as a power in the Indo-Pacific region

Besides the economic development, a major source of concern for the U.S, and its Indo-Pacific partners is China’s military growth. In November 2013, In November 2013, at the Third Plenum of the 18th Central Committee of the CPC, Xi Jinping called for “deepening national defense and military reform.” China’s reforms were coming forward because of growing concerns regarding lack of resources and the need for military modernization. Since then, core changes have been made in its military structure and industry. During the last decade, China has implemented a huge modernization program for its the armed forces. According to a US Department of Defense (DoD) special report, since 2004 China has the second largest defense budget after the U.S. For the fiscal year 2022, its military expenditure will be 7.7 % its GDP percentage almost double the U.S (3.6%). In addition, its military growth demonstrates astonishing progress in the fields of computer science, robotics, artificial intelligence, quantum engineering and other technologies which make it possible the production of advanced defense systems.

China’s primary military investments are in the fields of navy and missile technology. Currently, according to a DoD 2020 China Military Power report, U.S. Navy is no longer, the biggest naval force of the world; China’s People Liberation Army Navy (PLAN) surpassed them in total battle warships (approximately 360 to 297) and the predictions for the future expecting the gap to brow. PLAN’s force consists of 2 aircraft carriers, 1 cruiser, 32 destroyers, 49 frigates, 37 frigates and 86 missile armed coastal patrol ships. PLAN has also 46 diesel-powered submarines, 6 nuclear-powered attack submarines and 4 ballistic missiles submarines. For the first time in its long history, China develops so huge a naval force. According to a DoD report, in 2019 PLA Rocket Force launched more ballistic missiles for testing and training than the rest of the world combined. Additionally, China has deployed a long-range missile program that can carry twenty-one nuclear missiles and can easily target the U.S. The primary installations of PLA Rocket Force with over 10.000 thousand rockets are right across Taiwan.

Another issue that needs addressing is of course the Chinese policy towards Taiwan. Sino-Taiwanese relations were always very tense and since when Xi Jiping came to office they became even worse. Beijing crossed the lines with the Taiwan Straits crisis in 2021. This hostile act alarmed Taiwan and its democratic neighbors. U.S feared that this provocation could evolve into a real Chinese invasion.

In the past years, South China Sea became a top priority for the Chinese foreign policy. It creates a complex of artificial islands with harbors capable of receiving warships and tankers in the Spratly and Paracel Islands. China’s ambition is to become the effective ruler of the South China Sea developing those assets into robust platforms that can provide both logistical support for a myriad of fishing boats, government vessels, submarines and aircraft to dominate the sky and the water of the region, and some grounds for generating large economic and security zones.

As mentioned above, PRC’s stable and progressive growth led the Obama administration to the Pivot-to Asia policy. U.S current foreign policy in the Indo-Pacific region is mainly based on a network of military alliances. After WW II, U.S. have established very close ties with a lot of the states in the region. Already since the 1950s, the U.S. have signed defense treaties with Australia, Japan, The Philippines, and South Korea. These treaties allow the U.S. to have a military presence in the above states (in some cases), to provide these states with military equipment and to organize joint military exercises. Australia is an Anglo-Saxon country and a close ally which has its own concerns about China’s activity in the Indian and Pacific Oceans. For this reason, Australia moved towards the modernization of its navy via the AUKUS agreement, a trilateral agreement between Australia, UK and the U.S. which allows for the three countries to exchange expertise and material to construct nucleal submarines. AUKUS also includes intelligence sharing and cooperation in the field of cybertechnology. Japan is currently the fourth largest trading partner of the U.S. in goods. In addition, it is a valuable military ally of U.S which has equipped with modern armed forces. Yokosuka in Japan is currently the base of the US Seventh Fleet and there are two major Air Bases of the U.S. Air Force with advanced weapons in Okinawa. The total deployed personnel are approximately 34.000. South Korea is also another traditional valuable ally of the U.S. in the region both because of North Korea and of China. U.S. and South Korea are having strong trade ties and a comprehensive cooperation in technology issues. Currently, 28.500 US troops are stationed in South Korea.

Because of China’s activity in the Indo-Pacific region the U.S. are primarily focusing on maintaining combat readiness and forward deployment. The Indo-Pacific Command is the biggest Command of the U.S. military structure, numbering approximately 375.000 military and civilian personnel, among them 130.000 sailors, 46.000 airmen, 86.00- marines, 106.000 army soldiers,38.000 civilian personnel and 1.200 special operations personnel. The Pacific fleet is the biggest of the U.S. Navy and consists of the Third, Fifth (currently stationed at the Persian Gulf) and Seventh fleets. It has 6 of the 11 carrier strike groups, about 200 ships (66% of the entire U.S. Navy), and 1.500 aircrafts.

Besides military restraint of China, the Pivot-to Asia policy has two other objectives: increasing trade with, and the military and economic enhancement of, its allies on the region. Starting 2014, US aid to the region in the form of military assistance has been steadily increasing. Between 2018 and 2019, the Asia-Pacific region saw an increase of $110 million in the allocation of US aid for conflict, peace, and security. This leads to the securitization of aid, with the allocation of a part of Official Development Assistance (ODA) originally meant to catalyze public development, to serve US defense interests instead.

Since the end of the 2000s China economic development threatens the primacy of the U.S. Obama’s administration introduced this rebalancing pivot-to-Asia strategy aiming exactly at China’s rise. Since 2011, this policy includes the relocation of the U.S. resources (military and financial) from the Middle East to the Indo-Pacific region. Restraining China in the fields of trade, policy and military remains the top priority of the U.S. foreign policy and, to accomplish this, the U.S has introduced a multidimensional action plan with bilateral defense agreements, trade agreements and financing for the allied Indo-Pacific states. The best way for the US to assert its place in the area is not a military- only strategy but a mixed strategy focusing on the financial and trade deterrence of China.